After a great season for the Rangers across the board in 2019, resulting in our highest player retention number ever, the club added a new all age team to the mix.

This meant a lot of reshuffling of players across our all age squads. Last year’s B team formed the basis of our AA13s, continuing in the same division with seven returning players from the B’s, supported by four C’s players, two Silvers players and three new Rangers.

After only two preseason games, the team went into the season in Division 11-turned-13 with high hopes. 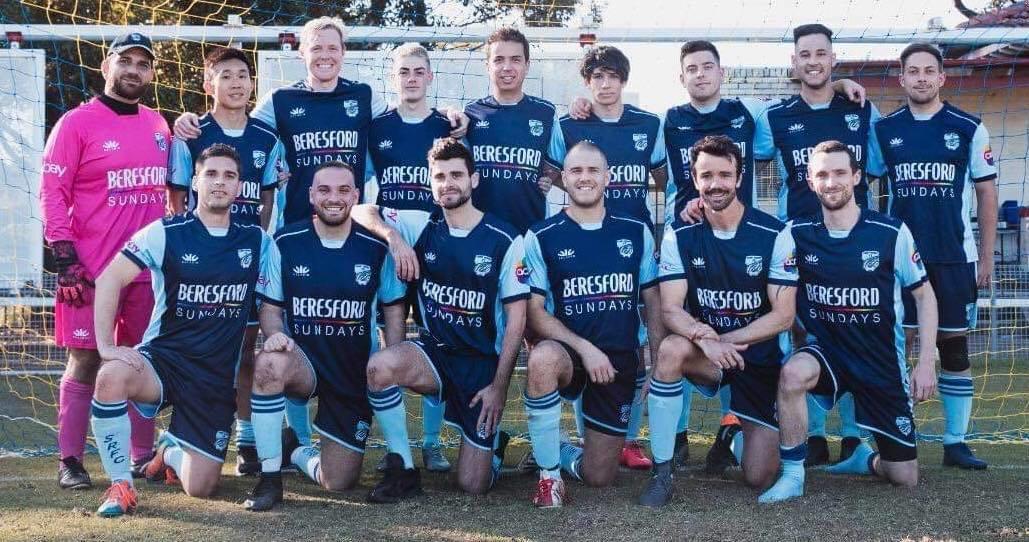 Contact training after the COVID lockdown in NSW re-started with a ‘friendly’ training game against the AA14s. A self-destructive red mist descended over the team, and a combination of an unlikely Chris Hicks goal against us and probably our worst team performance all year meant we started the season badly. More INTENSITY was needed.

We re-grouped, re-set and although we ultimately lost our opener 0-2 against former Div10 Enfield at home, the performance was good. On the day we were just unable to score any goals in a dominant first half, before the momentum went against us. 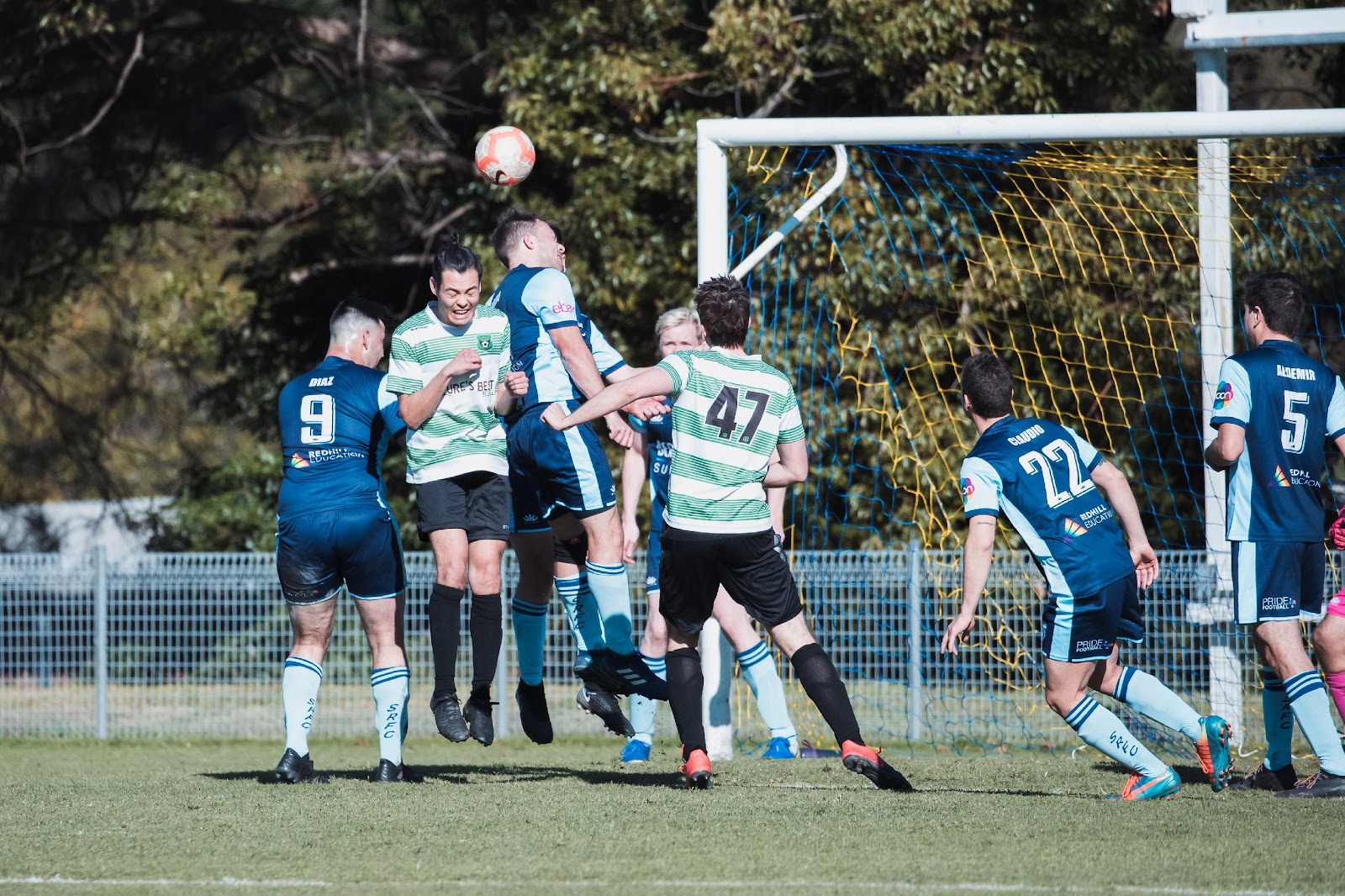 The team fought back in Round Two, dominating and defeating Burwood, the other former Div10 team in the league, 2-0 at Blair Park, on the best surface we got to play all season. It was a great way to finish the week after a stunning mid-week training game performance against our Div9 team. It was also the only game Dean Hathaway played in the first half of the season, who the team was going to miss a lot.

The Round Three game against Marrickville which was moved to Beaman Park last minute – (Blick was closed due to wet weather, shocking) – was a game to forget. We did however give our A’s a good run for their money after their opponent didn’t show up, drawing 1-1 with a goal from Enrico.

Captain Shaun more than ably stepped into the goal for a few weeks this year when Goalie Jon was battered and bruised, including in Round 5. In a very tight and strong performance, Leichhardt edged us out 1-0.

Approaching the end of the first half of the season we went to play Balmain at Callan Park, the defending champions of Div12 who in the end won the league this season too, the club which so kindly allowed us to play under their umbrella for years. In a thrilling game where we came back from being 3-1 down to equalise and only lose 4-3 to a controversial last minute goal where the assistant referee unfortunately missed a clear offside.

The second half of the season started the same way as the first. A loss against Enfield, this time with Ale’s first goal of the season being a consolation and another win against Burwood. This was followed by a 4-2 win against Canterbury playing in our white away kits – probably should’ve worn them all season!

In our last game of the season, against a team looking to win the title with a win against us, we came to park the bus after conceding a number of goals in the previous few weeks. The performance was our best one of the season and not only did we slow the goals but we scored some great efforts of our own as we beat Ashfield Pirates 4-2 at Croydon Park. There were great disciplined performances all across the pitch, and there were some stunning saves from goalie Jon.

Our team photo of our full squad on the last game day (before the game/win) is reflective of the great season we had, which brightened our year up and brought back some normality while we all faced the challenges from Covid and the restrictions on our lives which followed. We may have been limited to four wins and one red card this year, finishing 6th, but there were many strong performances even in defeat and it was a season to remember. 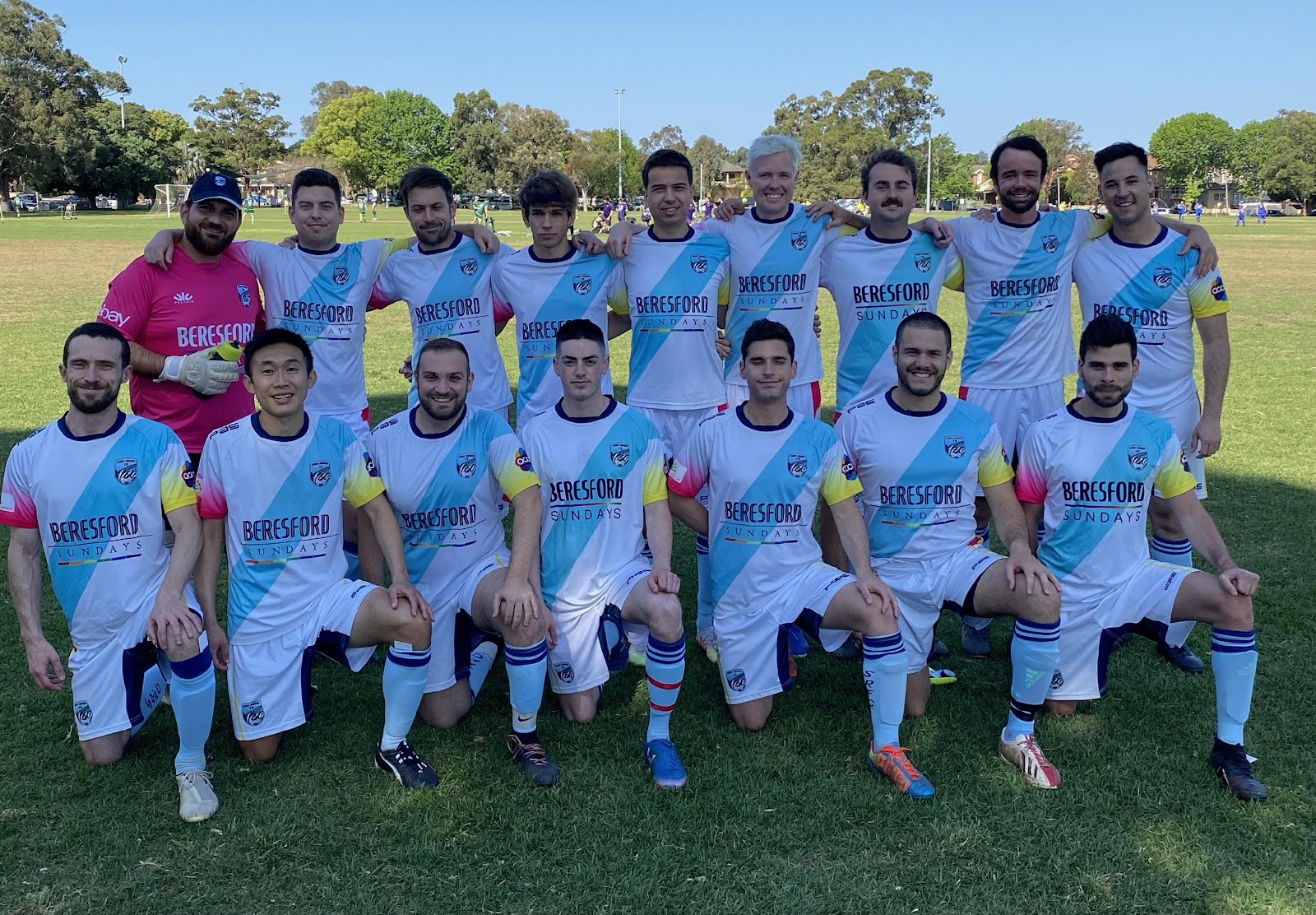 It was a pleasure to play with the team and it wouldn’t have been possible without the hard work from co-coach Mark put into the season and the training sessions he ran and I’m looking forward to the years ahead with this amazing bunch of guys. {Mark: Same goes to co-coach Kenan from me! Legendary statistical and administration skills rivalled by none, and great co-contribution to our coaching for the season}

A special thank you also to the other members of the committee for their support, Div 14 coach James Cardall for loaning his players on our days in need and our supporters who managed to come along to our games where the rules permitted